GURPS Bio-tech (4e) p.90 has this interesting little vignette:
Missing: Two raccoons, aged 3 and 4 E-years. Gray fur, distinctive black mask marking over eyes, rings on tail. $10,000 reward for information leading to recapture. Please contact Macrotech@Fed.Net.Com.
“Let’s see if I understand this. Two of our Doolittle Virus enhanced Neo-Coons faked a stomach ache, lured you into the cage, took your tangler and glommed you to the wall. Now they’re loose. Where would they go?”
“I don’t know, sir. These ones were being trained by the Bureau for covert ops, but we hadn’t completed indoctrination – there were some problems in training. Anyway, after they jumped me, they used the computer to send out e-mail, then wiped the system.”
“Used the computer? How? We didn’t modify their hands! They’re supposed to look like ordinary raccoons!”
“Even normal ’coons have good grasping paws, sir. That was the whole point of using them. Our Neo-Coons can’t talk, but they can type and use tools if they’re sitting on their haunches. I just wish I knew who they were trying to get in touch with . . .” 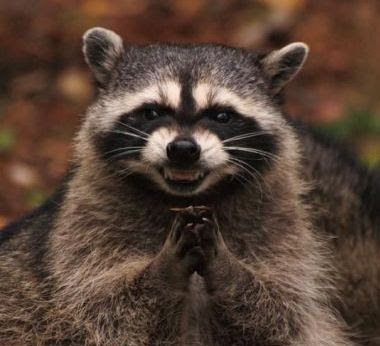 In THS Toxic Memes p.66 there are descriptions of urban legends about secret communities or even an “animal militia” of uplifted animals.
In THS Cities of the Edge (4e) is the passage: “Although it’s not a serious problem at the moment, a number of raccoons with the Doolittle virus enhancement (Broken Dreams, p. 140) have begun using tools in an almost human manner, and have been raiding east coast suburbs and metavillages, robbing delivery cybershells, and hiding in abandoned and mothballed buildings.”
THS Broken Dreams tells us: “In 2089, hunters in the Colorado Rockies reported deer cooperating – “ganging up,” in one man’s words – to attack the men hunting them. Another hiker in the same area told police that he saw a bear using an old backpack as a portable storage for fish. These stories were dismissed until a group of raccoons defeated relatively sophisticated security systems to break into houses. When the local police managed to kill one of the raccoons, scientists discovered that it had a substantially more complex brain than was normal for its species. Eight years of investigation led to the discovery of anti-government crusader Richard Law Taylor’s “Doolittle” virus, a germline alteration that increased brain complexity and resulted in surprisingly adaptable, and often dangerous, behavior in the modified lines. Doolittle (which is actually an assortment of variants, each designed for a particular species) provides a +1 to IQ. Since 2090, more than 1500 Doolittle-infected animals have been found across North America.”
Any GM thinking of incorporating these ideas into a game is advised to have a read of Bruce Sterling’s “Our Neural Chernobyl”. Our Neural Chernobyl is a short story written in the form of a review of a fictional book. The fictional book describes the origin and consequences of an accidental enhancement in the intelligence of several animal species. The section on the racoons is particularly interesting:
But the synergetic effects of dendritic branching and manual dexterity are clear in a certain nonprimate species. I refer, of course, to the well-known “chernobyl jump” of  Procyon lotor, the American raccoon. The astonishing advances of the raccoon, and its Chinese cousin the panda, occupy the entirety of Chapter 8. Here Dr. Hotton takes the so-called “modern view,” from which I must dissociate myself. I, for one, find it intolerable that large sections of the American wilderness should be made into “no-go areas” by the vandalistic activities of our so-called “stripe-tailed cousins.”
Admittedly, excesses may have been committed in early attempts to exterminate the verminous, booming population of these masked bandits. But the damage to agriculture has been severe, and the history of kamikaze attacks by self-infected rabid raccoons is a terrifying one. Dr. Hotton holds that we must now “share the planet with a fellow civilized species.” He bolsters his argument with hearsay evidence of “raccoon culture” that to me seems rather flimsy. The woven strips of bark known as “raccoon wampum” are impressive examples of animal dexterity, but to my mind it remains to be proven that they are actually “money.” And their so-called “pictographs” seem little more than random daubings. The fact remains that the raccoon population continues to rise exponentially, with raccoon bitches whelping massive litters every spring.
Racoons are worth considering even if you do not opt for other wild uplifts. Below is the profile for uplifted racoons for anyone that does not have Bio-tech 4e.
Neo-Coon
-92 points
Attribute Modifiers: ST-5 [-50]; DX+2 [40]; IQ-3 [-60]; HT+1 [10].
Secondary Characteristic Modifiers: SM -3; Per+4 [20]; Will+3 [15].
Advantages: Claws (Sharp Claws) [5]; DR 1 [5]; Night Vision 1 [1]; Super Climbing 1 [3]; Teeth (Sharp Teeth) [1].
Perks: Fur [1].
Disadvantages: Bad Grip -3 [-15]; Cannot Speak [-15]; Curious (12) [-5]; Horizontal [-10]; Short Lifespan 2 [-20]; Sleepy (1/2 of the time) [-8]; Social Stigma (Valuable Property) [-10].
Availability: $50,000. LC4.
These were modified for increased IQ +2 and to remove Wild Animal meta-trait (except Cannot Speak). All other advantages and disadvantages are native to raccoons.